Tannins of Wood and Skin

I've thought about it every time I opened the cupboard and saw the can looking at me (and it's been in there for a solid month and a half). I can't escape the feeling that I'm missing some sort of cultural reference or in joke or something. I've googled 'BAE' and think I have a handle on that, but then, a badly formed search term can throw one off the scent forever.

Despite all that, I'm reasonably confident that I can still assess this beer fairly. If not, well, oh dear, how sad, never mind.

So, what I'm drinking is a Sour Ale with Pinot Noir grapes, aged in French Oak. I don't know anything about Stillwater Artisanal except that they're American (and that only because of the label).

This is a beer not heavily carbonated - although the style doesn't seem to lend itself to a good head. (Note to self: Investigate relationship between pH, acidity, brewing adjuncts, and head formation / retention) It has an attractive red-amber colour with an interesting (and, to me at least, unusual) gold rim. 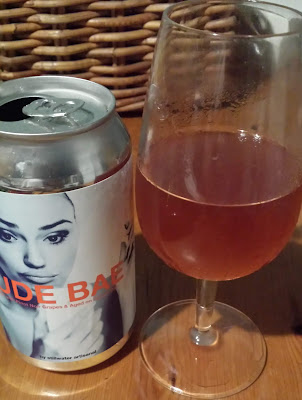 The nose starts off with the sort of grubby, earthy sweetness that French oak so often gives to beer or whisky (something to do with malt perhaps?). Then there's the flat sweet note of sour beer, and something a bit straw-like - akin to a cider, but not as sweet.

The palate has a sherbet-y acidity. Perhaps it's a combination of oak sweetness with kettle souring but it seems more sweetie-like than many sours.

(NB! I'm assuming this is a kettle sour, purely on the basis that it lacks the depth of a koelschip/lambic style beer)

There's less tannin than I'd expect given the Pinot Noir grapes and French oak, although now that I've mentioned Pinot, I can indeed taste red fruit. And perhaps the tannins of wood and skin are coming through in the bitter finish this beer has. Or perhaps not.

The red fruit notes are really quite generic - there's not a specific fruit I can pick out.

I would rate this beer as Good. It's more interesting than most kettle sours, but then they have thrown Pinot grapes and French oak at it, so one would expect some complexity.

I'm still not sure what to think about the name. I suppose brewers produce so many different brews that after a while it must be difficult to think of new names. Certainly, it's no sillier than, say, Disco Forklift Truck. I suspect it comes back to my original point -  I feel that I'm not in on the joke.
Posted by rodbod at 1:53 am